skip to main | skip to sidebar

There is a price to pay for living with a Star Wars mad 40 something year old: I receive e-mails throughout the year with photos of amazing Star Wars birthday cakes and the related anticipation of one such masterpiece appearing for his birthday. In previous years I have managed to "ignore" the constant trickle of hints but this year I was asked specifically to create a Star Wars cake.

The brief: just a simple Star Wars recreation of the battle of Hoth, complete with power generator and an AT-AT walker. Oh, and it should include Jelly-Belly jelly beans!! So nothing too complicated then? And all this with a week to do it ...

First step - scour the web for images for inspiration. Interestingly very few were stills from the film which surprised me, and most were other peoples' physical recreations of the battle scene (I should be thankful that my other half is not quite as nerdy as those people) which wasn't very helpful for my need to be as accurate as my skills allow (now who's the nerd?). I did find some useful images which helped formulate the design and off I went.

I made a 9" gluten free vanilla sponge and filled and coated with a lime and desiccated coconut buttercream (a flavour experiment which worked very well). I then covered the cake and board in one go with white fondant. Next step was to create the snowy crevasses, then make the power generator. I cut eight large thick circles in grey fondant, used a smaller circle cutter to mark the inner circle and added lots of texture before sandwiching them together into 4 pairs. I used two pieces of spaghetti to stand each circle upright and then pushed a long piece of spaghetti through the middle of the circles and cylinders of fondant between each circle. I finished off the power generator with some grey supports. 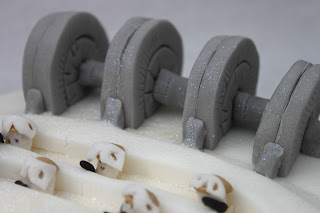 A standing AT-AT walker was not going to be possible in the timescale, as I would have had to make it in sections and let each section dry before putting it all together; so I opted for the fallen one which I think came out well. I also added a gun turret positioned in the snowy crevasses. 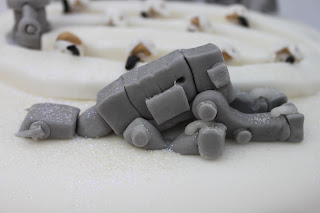 As I mentioned earlier, the brief included Jelly-Belly jelly beans and as I had't included these in the sponge itself I had to find a way to include them in the decoration. I decided to use white ones (incidentally these are coconut so fitted very well with the flavour of the buttercream!) and turn them into Rebel Alliance fighters. Smiley faces drawn with an edible ink pen, brown hats, snow goggles and a black gun and my guys were in place. Mr "I want a storm trooper and some more realistic (like in the film) people" didn't seem that impressed but they made me smile every time I looked at them so they were staying! 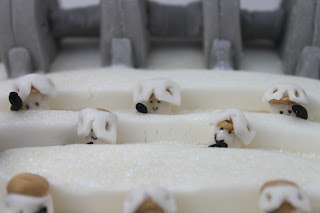 The finishing touches of his name in Star Wars writing (template created on the computer, printed, cut out and placed on grey fondant which I then cut to shape) and some edible snow like sprinkles and glitter and the cake was finished ... 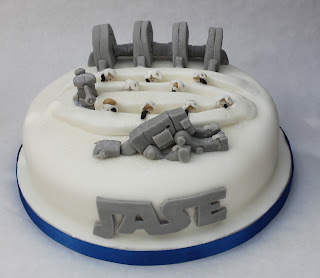 As it was also Star Wars day recently (May the fourth be with you) and we had a packet of gingerbread dough in the fridge that the kiddies had persuaded Daddy to buy for them, we decided to use the fantastic Star Wars cookie cutters that we bought last year on our holiday in Florida. 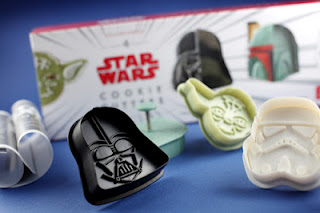 I helped them roll the dough out and they both picked two cutters each and cut and plunged Yoda, Darth Vader, Boba Fett and a stormtrooper. 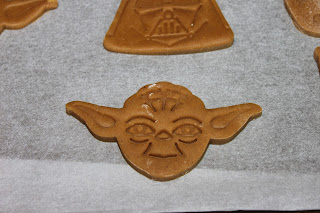 The baked gingerbread cookies came out very well and they enjoyed eating them. Perhaps another time (when they are a bit older) we might also have a go at icing them ... 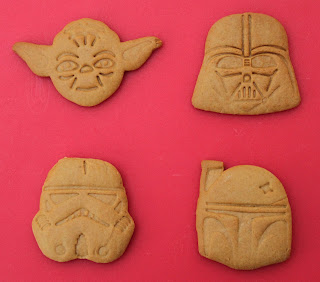 © 2012 Nicola Noble: Please observe the rules of copyright and blog etiquette. If you use my ideas or images, please link back to my blog. And do let me know - I'd love to take a look.
Posted by Nicola at 15:49